Through the testing phases, and initial release at IRCHA 2016 in Muncie, IN, pilots have reported improved cyclic response, increased collective authority, and a bump up in flight time between 10-20% depending on a pilots final set up. Flight performance comments have been received as "Incredibly stable, yet quicker cyclic rates compared to my previous blades", and "Overall there seemed to be less loading on the rotor head all around with collective and cyclic inputs, or both inputs at once with demanding maneuvers".

Form & Function; Perfect Harmony
Every single millimeter of the VTX Rotor blade is aerodynamically data driven to perform for all aspects of helicopter flight. During development the VTX team had zero preconceived notions of what a perfect rotor blade would or would not look like. Aerodynamics held the first and last concepts of design to bring this rotorblade to fruition.

Aesthetics
The design is unique thanks to the varying chord width, tip profile, and overall blade shape. The VTX Blade design is not just to draw attention by being boldly different; each size of VTX rotor blade has spend thousands of hours in testing to ensure that maximum performance is achieved. Scalability within the VTX rotorblade line up never has, nor will be, an option in development.

Revived quick and in perfect condition. I put only 2 flights on these with my oxy 5. Heli felt good. Happy with the purchase. Would buy again. 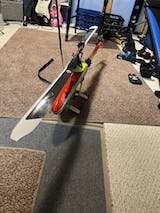 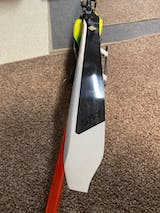 Thanks heli direct for the fast shipping, you guys are great!

I didn’t really know why I was seeing these on so many helis, and decided to try them despite the price. They fly better than any other blades I’ve tried. They require less cyclic pitch and are super responsive. I’m not a smack 3d pilot but I’ve been able to piroflip with these on my G570. Would recommend to anyone.

Aggressive!!! Tons of bite at moderate to high RPM.!

Product has been added to your wishlist.
You can view your wishlist by creating or login account.
Please create account through ##customer_email## email
Login Register
4
4
×
Welcome Newcomer