$119.99 ( / )
VMAR Dornier DO335 Pfeil - Twin Engine Terror.As the second world war drew to a close, an ominous fighter rose into the skies above, bringing forth devastating performance and capability into the war torn skies over Europe. Designed to decimate the allied forces with terrorizing levels of speed, Nazi controlled...
Share on:

As the second world war drew to a close, an ominous fighter rose into the skies above, bringing forth devastating performance and capability into the war torn skies over Europe. Designed to decimate the allied forces with terrorizing levels of speed, Nazi controlled Germany summoned the last vestiges of the Luftwaffe, with a radical twin engine design that far surpassed conventional aircraft of the day.

Utilizing a stunning inline twin engine layout, the DO335 was ground breaking in every form, and was only surpassed in speed by the jet powered ME-262. Radical in form, the DO335 was a terrifying glimpse into the dying days of WW2 - an aircraft capable of shifting the balance of power with unmatched speed, power & performance.

Dutifully inspired by this incredible WW2 machine, VMAR brings the DO335 into scale model form, offering detail and capability that is menacingly paired with the potential of its full scale counterpart. With the unmistakable twin motor push / pull inline layout, the DO335 incorporates the same swept wing design of its predecessor, with Luftwaffe livery that draws this aircraft back to life in WW2 glory.

Easy to assemble in ARF form, the Dornier DO335 comes pre-covered in Polycote ECS covering, with a no glue assembly process that equates to a build time of a few short hours. Incorporating a two piece wing for the ultimate ease in transport and storage, the wings are easily attached via basic wing nuts, providing a secure and simplified wing joint for rapid assembly at the field.

Feature packed with excellent flight capability, the DO335 adds optional flaps to expand the flight envelope, paying dividends with low speed landing approaches. Utilizing (4) to (6) micro servos, the DO335 can be built in low cost form, featuring a fixed tricycle landing gear that offers nose steering capability for ease of ground handling & taxi.

Take to the skies with the fearsome VMAR Dornier DO335 Pfeil, and prepare to experience epic twin brushless performance. Emulating its true scale design, the DO335 is ready and waiting for intense levels of speed, coalesced with the unmistakable Luftwaffe livery that terrorized the European skies in the fading light of WW2.

All VMAR kits are trial fit at the factory and inspected to be free from defects & flaws in both material and craftsmanship at date of purchase. Warranty does not cover any components or parts damaged by use or modification. The pilot takes full responsibility for inspection of aircraft before and after each flight, making sure the aircraft is in flight worthy condition relating to safe control of aircraft. Warranty does not cover crash damage or failure of ancillary components unrelated to the aircraft.

Haven’t built yet but looks nice . For the money should be a nice value. Seems well constructed. Shipping was fast and free.

The ARF version came well appointed and nicely finished. The kit quality was good. I think they have ironed out the model over the years. I did have to re-glue in a couple hinges and I chose to reinforce the firewall with some epoxy just to improve longevity and in case I did a hard landing. If I had a complaint, it would be the cheap plastic of the front cowling. It is really thin and I knew any mistakes on landing and it would be shot. ( Note to others - I knew I should reinforce it, but I really wanted to see how it flew.) This is my first balsa in a long time and I must say I forgot how delicate these were compared to foamies. The model is, IMHO, heavy weighing in at 3.2 lb ready for flight. Seems like a high wing loading. Hitting the balance point was a challenge that required 4 oz of lead in the nose and battery full forward (to the firewall). The strap they provided was of no use.

I did the maiden and it took off smartly at about 3/4 throttle. Liftoff was smooth and as i climbed out I noticed that it wanted to roll to the right and go down. I put in a few degrees of down thrust bust no angle to counter torque. It took a pass or two to get the model in trim. Once trimmed it flew pretty well. The sound was really unique. It was similar to a drone, but not exactly. We thought it sounded really cool and different. There was even a slight EDF like wine to it. All eyes were on this plane zipping around the sky. Definitely will get the attention of all at the field.. The rudder is tiny and it was surprisingly effective in turns. I checked the glide and as expected, due to the wing loading, without power it has a 2 to 1 glide ratio. Perhaps slightly better than a brick. The roll rate with max throw on the ailerons was a respectable 1 sec per revolution. I checked flight with full flaps and it slowed pretty well dropping steadily but at a lower forward speed. I set my flight time for 5 minutes on a 3000 mAH pack and it worked out well with the motors and ESC I chose.

Overall this is not a plane for a beginner. It has a heavy wing loading so their is no such thing as too much power for this beast. It handles well once trimmed and as long as you fly it within its envelope if should be a good plane. For the price, I think it is a good value. Definitely needs a better cowling, but hey, if that is the biggest complaint, VMAR is doing something right. 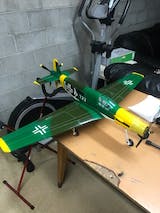 The kit pieces seem to be well constructed but the fuselage is almost 12 inches too short of being close to scale. I am building my own fuselage to remedy this and adding retracts. A fun kit bashing project so far! 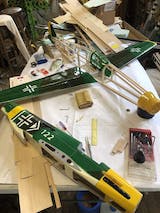 The kit pieces seem to be well constructed but the fuselage is almost 12 inches too short of being close to scale. I am building my own fuselage to remedy this and adding retracts. A fun kit bashing project so far!

Product has been added to your wishlist.
You can view your wishlist by creating or login account.
Please create account through ##customer_email## email
Login Register
3
3
×
Welcome Newcomer